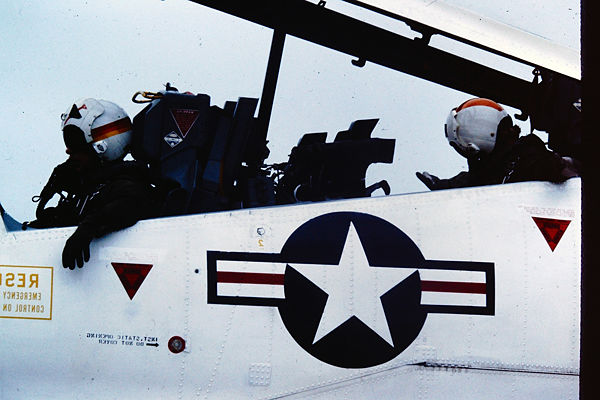 “I flew my B – 4 flight yesterday afternoon and did pretty well. I got an above average grade in my navigation hitting most all my turn points right on course. The only significant problem I had in the whole flight were my time estimates which were off due to a math error on my part (go figure). My pilot told me that the “hop” was above average and that I had good potential. I think this was the first flight so far that I really felt in control of everything and got a chance to call all the shots.

It was really something to bring that plane down. We started a decent from a cruising altitude of 25,000 feet, which was well above the cloud layer obscuring most of the Gulf Coast. That was really beautiful. It was just about sunset and the cloud layer looked like a huge amber quilt. Penetrating into the clouds was kind of creepy however. It seemed that instantly the clouds engulfed us and it got very dark immediately. I groped for the reo-stat control to my side and adjusted the instrument lights. It got bumpy and I felt my insides groan, but I kept my instrument scan checking airspeed, altitude, course, airspeed, altitude, course. Keying my helmet mic: “Approach Control Zero Foxtrot 27 leaving one-six thousand”. To instructor pilot: “Sir descend to 1200 feet…passing one 5000 feet… “Sir mark right heading zero niner zero… passing ten thousand…Sir mark right heading zero five zero” Approach: “Foxtrot 27 contact Sherman tower at the final approach fix with the gear” “Zero Fox 27 Roger, switching to the tower” “Sir slow to gear speed, standby for the landing checklist: fuel transfer-off, speed breaks-out, wheels-three down and locked, etc. “Tower Zero Foxtrot 27 final approach fix with the gear”. Tower: “Zero Foxtrot 27 is cleared to land on seven right, winds one two zero at twenty, altimeter 29.96”. “Zero Foxtrot 27 cleared on the right 29.96”.

I never would have thought it possible. I’ll never forget thinking as we approached Denver International last May, how anyone could break through a layer of clouds just 1000 feet above the ground and land. We were also “crabbing” about 20 degrees to the right of the runway, due to the high wind speed. We’re on short-final looking over our left shoulder to look down the runway approach. It just didn’t seem possible – but it happened and it was great!

Well, let’s hope I can pull it off again tomorrow when I am sure I will probably fly might B-5 check flight.