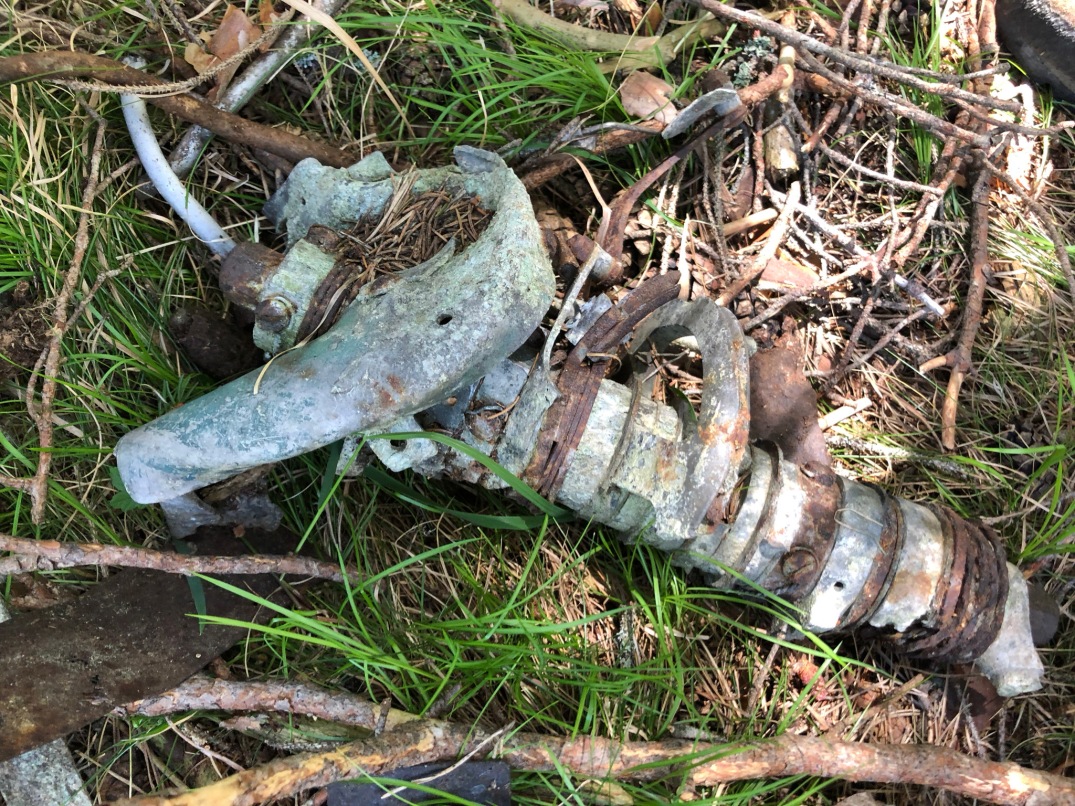 In July of 1944, the 301st Bomb Group flew 21 bombing missions in 26 days. On the 26th, their target was a Natzi aircraft engine plant near Vienna, Austria. Things went south when the fighter escorts didn’t show up. Almost half the bomber group went down in flames by over 100 German fighters. My cousin pilot 2nd Lt. David Kerr was one of them.

74 years latter, we found the crash site with the help of several local Austrians. This is what it looks like today. There are thousands of pieces of the aircraft scattered for many kilometers. Many are clustered near these 360º images I shot on my trip there in 2018.

I am taking my boy Ryan to see the crash site today. Yesterday the family that owns the property treated me like a king. The son of the ranch refused to let me cary my backpack up the mountain. We talked for hours after this incredible exploration over dinner.

Upon arrival, my most gracious host presented me the radio operators chart holder complete with their call tag #30385. This I will give to his sister Mary Ann in Texas when I return. The green coloration on one piece of the aluminum left no doubt this was David’s B-17 F model. He also gave me three 50 caliber rounds (defused) and a couple of squares of flack jacket armor.

3 local Austrians spend most of the day with me cataloging everything from flight controls to bomb fragments. One guy dug up parts with his metal detector at every turn (Steve you would be impressed with his skill). His older brothers were on the scene right after the crash in 1944. Not aware of what this really was, they described it as Christmas-like with all the silver, red and green bright colors – the smell of burning spruce.

As I reached the summit with the family Cocker Spaniel, I was greeted by only the birds and the wisp of the cool mountain air. A cuckoo bird in the distance chimed in. In the distance to the west, a 3000 meter snow caped mountain top stood majestically across the valley below.

From the Rocky Mountains, to the Smoky Mountains it’s the most beautiful forrest I have ever trekked. There is no underbrush like Tennessee, so you can see a long distance down the steep slopes. No poisonous snakes to threaten travelers here. In fact I didn’t see a squirrel, bee or spider web on this bright, warm May day.

The tranquil nature of the landscape juxtaposed with the most violent event imaginable, was odd. It felt so incredibly peaceful in the midst of a 74 year aerial graveyard. It remains like sunken shipwreck. There is a large opening in the dense tall spruces near the top of the ridge line were trees will not grow again. This would be a fitting place for a small monument to the crews.

We found plexiglass from the plane which indicated to me an explosion before it had a chance to burn. We located the precise location were most of the crew where found, buried and reburied in 1947 at Jefferson Barracks in St. Louis, Missouri.

The sole of a boot, shredded nylon, even large pieces of of a leather glove lay scattered on the hillside 74 years later. In David’s plane alone every 500 lb. bomb but one detonated on the way down. A hole the size of baseball in the massive propeller blade was shot clean through. Most of the airplane is less than the size of your fist, and they lay at every step for hundreds of yards down the steep slope.

Some of the parachutes were witnessed catching on fire going down. I believe that much of the crew were probably killed in the explosions, and most likely died instantly, including David and his copilot.

Eye witness accounts of the fall have been well documented by our host. He has a vast database of information with a map detailing debris over more than 6 kilometers of the area.

The year after this infamous tragedy the area was overrun by the Soviets with fierce fighting. The grandmother of the current property owner was killed in a 1945 rocket attack on her property. Ironically, this was the high-water mark of the Soviet push west in this region.

Our Austrian friends grandfather was able to survive the war and surrendered to the American forces. He told me that most locals in the past have not wanted to discuss the WWII history in this region. This is changing he said.

The family is very protective of this sacred ground and have done a great job keeping it as-is. At their request, we will keep its location a secret. My hope is, that this might give some closure to family still living that never knew their fate. Like so many horrible wars, many times, they just never came home.